Spathiphyllum is a genus of about 47 species of monocotyledonous flowering plants in the family Araceae, native to tropical regions of the Americas and southeastern Asia. Certain species of Spathiphyllum are commonly known as spath or peace lilies.

The peace lily is a tropical species that is a favorite flowering houseplant. A striking plant when used in mass display, the peace lily blooms in spring with long-lasting flowers that hover gracefully over the leaves on the stalks. A well-grown peace lily may bloom twice a year, resulting in several months of flowers. The plant has glossy oval leaves with points that emerge from the soil.

Peace lilies are indisputably terrific as houseplants. Small varieties look attractive on a tabletop and bigger ones can occupy a nice-sized spot on the floor. They filter more indoor pollutants than most other plants, so are great for bedrooms or other frequented rooms. Inside the tropical plant's pores, toxic gases like carbon monoxide and formaldehyde are broken down and neutralized. Peace lily can also be grown outdoors in warm climates, where it can tower as much as 6 feet high.

Despite their name, peace lilies are not members of the lily family. The peace lily is a member of the Araceae family of plants, known collectively as aroids. It is related to the philodendron, anthurium, and alocasia—also very popular as houseplants.

Although it is called a "lily", the peace lily is not a true lily from the family Liliaceae. True lilies are highly toxic (poisonous) to cats and dogs, but the peace lily, spathiphyllum is only mildly toxic to humans and other animals when ingested. It contains calcium oxalate crystals, which can cause skin irritation, a burning sensation in the mouth, difficulty swallowing, and nausea, but it does not contain the toxins found in true lilies, which could cause acute kidney failure in cats and some other animals. 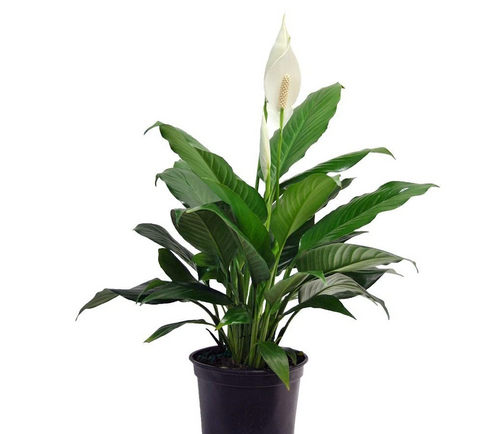