PAWPAW
Zone: 5-8
Growth Rate: MediumMature Spread: 15'
Mature Height: 25'Shape: Densely pyramidalSunlight: Full to partial
Soil Type: Moist, well-drained, deep, rich
Pawpaw is found throughout all of Ohio and most of the Eastern United States except for New England and much of Florida. It is a native understory or woodland edge tree, often found in moist places such as the bottoms of ravines, steep hillsides, and creek banks.

One tree often gives rise over the course of decades to a sprawling colony via its root system, which suckers several feet away from the parent tree.

This small tree is easily recognized by its large, tropical-looking foliage, and prized for its delicious fruits that mature in late summer. When found in the open, it may reach 25 feet tall and 15 feet wide as an individual tree. As a member of the Annona Family, it is related to other species of Pawpaw as well as other genera in this family (all tropical or subtropical in origin) and distantly related to the Magnolias and Tuliptree.

Planting Requirements - Pawpaw is somewhat exact in its requirements for successful growth. In youth, it requires shady sites to become established, as intense sunlight will harm the leaves of young trees. After several years, saplings can grow in partial sun to full sun, where the heaviest fruit crops will be realized and only if a genetically different strain of Pawpaw is planted nearby, for cross-pollination of the perfect flowers. Trees grown from separate seed sources or transplanted from different sites will eventually yield fruits, but those within a single colony will not, as they are all clones that cannot cross-pollinate and yield fruits.

Pawpaw strongly prefers soils of variable pH that are evenly moist but well-drained, deep, and rich (high in organic matter). It will tolerate drier soils with some degree of difficulty. Its root system is very coarse, so bare-root transplants should only be dug while dormant in late winter or early spring and transplanted immediately to a shady site. Trees dug as balled and burlapped specimens fare better, but should still be dug while dormant. Trees grown in containers from seeds are much more successful. Pawpaw grows in full sun as an adult tree (especially with supplemental irrigation, as is found in Pawpaw orchards) to full shade (as an understory tree under high-branched large trees) and is found in zones 5 to 8.

Potential Problems - Pawpaw is essentially free from diseases and pests. Its main problems involve re-establishment following transplant shock due to its sparse root system (see notes above) and fruit set as related to self-infertility. Get one or more genetically different pollinator trees. 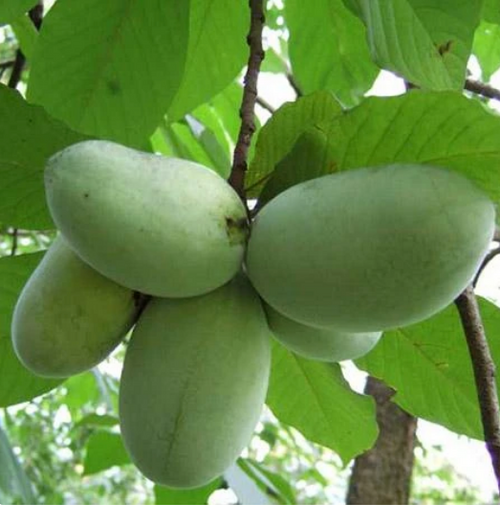