OHIO NATIVE PLANT
Baptisia australis, commonly called blue false indigo, is an upright perennial which typically grows 3-4' tall and occurs in rich woods, thickets and along streambanks from Pennsylvania south to North Carolina and Tennessee. It features purple, lupine-like flowers in erect racemes (to 12") atop flower spikes extending well above a foliage mound of clover-like, trifoliate, bluish-green leaves (leaflets to 2" long). Blooms in spring. Flowers give way to inflated seed pods (to 2.5" long) which turn charcoal black when ripe and have considerable ornamental interest. Seeds rattle around in the blackened pods which were once popularly used by children as rattles. Stems with seed pods are valued additions to dried flower arrangements.

Easily grown in average, dry to medium, well-drained soil in full sun to part shade. Best in full sun. Tolerates drought and poor soils. Over time, plants develop slowly expanding clumps with deep and extensive root systems, and should not be disturbed once established. May be grown from seed, but takes several years to establish. Plants take on more of a shrubby appearance and tend to open up after bloom. Trimming or shearing foliage after bloom helps maintain rounded plant appearance and obviates a possible need for staking, but eliminates the developing seed pods which are so attractive.

The genus name Baptisia comes from the Greek word bapto meaning "to dye".

The common name of false indigo refers to the use of certain native baptisias by early American colonists as a substitutes, albeit inferior, for true indigo (genus Indigofera) in making dyes. 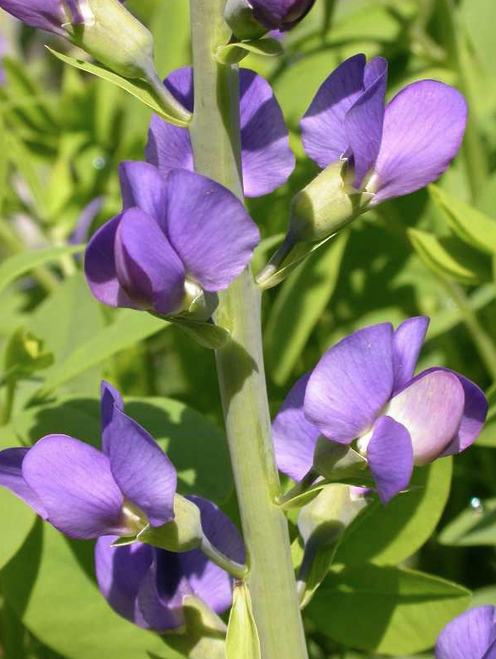